» Hyde Li was raised in Huaihua in the Hunan Province of China. He came to America alone – as a then 5-foot, 100-pound exchange student carrying a gigantic backpack – and spent his senior year with a host family in Gulfport, Mississippi. After that, he got his undergrad degree at the University of Alabama and completed grad school at the University of Dayton. Now – at 29 and 5-foot-2 – and an engineer at Fuyao Glass America in Moraine.

» Tommy Nguyen’s parents are from Vietnam. He was born in America and spent his first 13 years in Lawton, Oklahoma, before the family moved to the Dayton area. He ran track and played soccer at Beavercreek High School, is about to return to classes at Sinclair College and is a 22-year-old barista for Winans Fine Chocolates and Coffee.

The trio are also aspiring boxers who are preparing for the Oct. 8 charity fight show – AleBeast Knocktoberfest – which will be held outside Drake’s, beneath the large mural of Rocky Balboa and Apollo Creed that is being painted across three gym walls by artists from the K12 Gallery & TEJAS which is just a few blocks down the street .

The eight-bout card – which features many community members moonlighting in mitts – will benefit the Muse Machine.

John Drake, who owns the gym, teasingly and lovingly calls the addition of Li, Ashworth and Nguyen: “The Asian Invasion.”

In joining the stable of boxers at the old-school fight club, the three said they have met none of the obtuse, close-mindedness that has surfaced among some in this country. Instead they have been greeted by open arms …and then closed, padded fists.

“I live a couple of blocks away and always passed this place,” Grace said before her training session the other day. “I saw people outside doing Hits and Mitts and was interested.

“I finally walked in one day and everyone was super nice and friendly and that was cool. I didn’t know what I was doing, but from my very first class, the coaches and even my classmates helped me with my form and explained everything. That’s why I keep coming back and back and back.

“It’s just nice being part of such a supportive group. “But I’ll admit, they don’t take it easy on me, just because I’m a girl.”

Hyde Li and Grace Ashworth in front of the large Rocky Balboa and Apollo Creed mural being painted on the side of Drake’s Downtown Gym by artists from the nearby K12 Gallery & TEJAS on Jefferson Street. Tom Archdeacon/STAFF 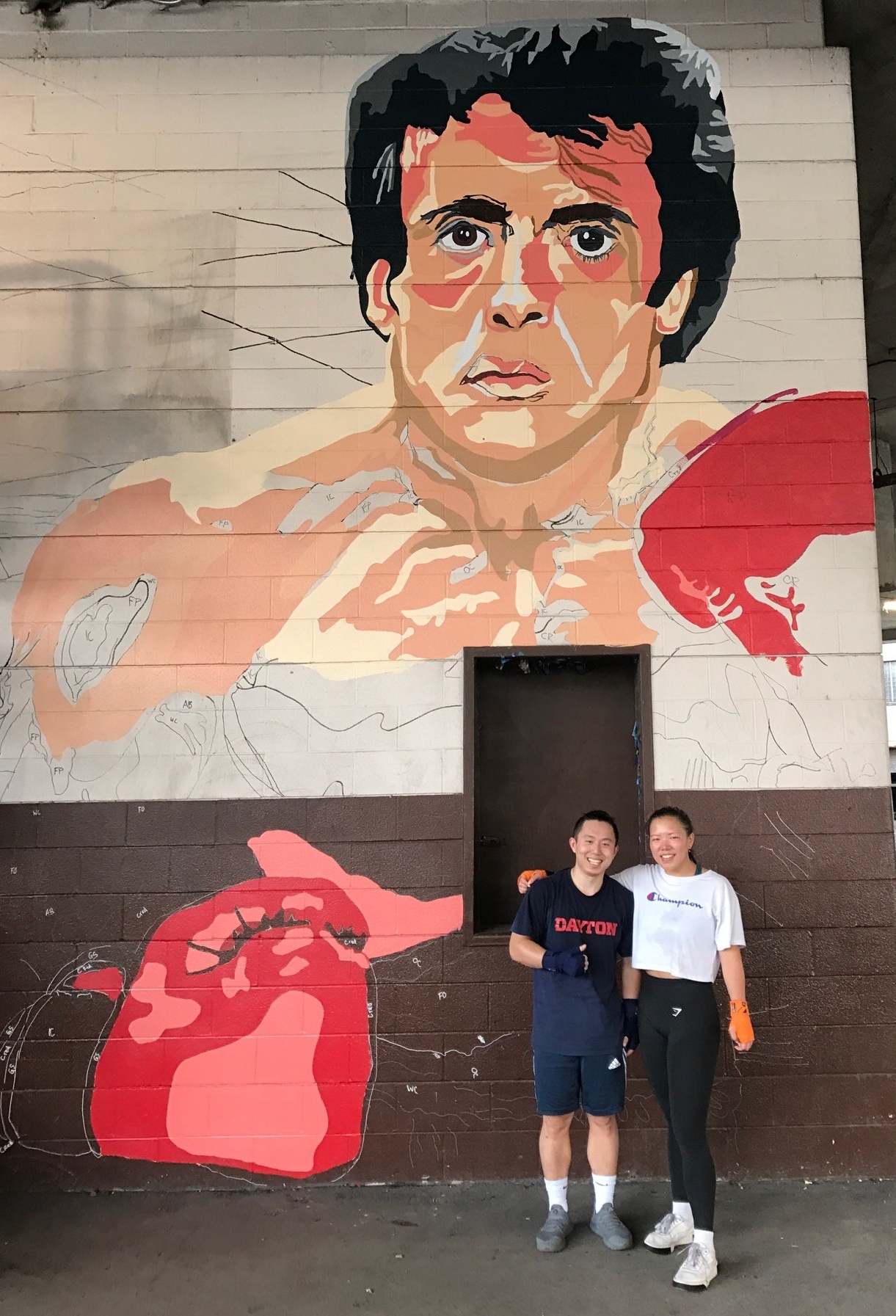 Hyde Li and Grace Ashworth in front of the large Rocky Balboa and Apollo Creed mural being painted on the side of Drake’s Downtown Gym by artists from the nearby K12 Gallery & TEJAS on Jefferson Street. Tom Archdeacon/STAFF

Hyde said his mother, XiaoPing, and his father, JianHua, worked hard to provide him a good life and that enabled him to come to the United States as a 17-year-old exchange student.

When he did – as many Asian students do – he adopted an Americanized first name to fit in better with his classmates.

In choosing a sobriquet for his birth name – QiYun – he said he went to the dictionary.

“I wanted something different, not John or Tom or Chase,” he said with a smile. “I came across Hyde, like from Jekyll and Hyde, and thought, ‘That’s cool. I’ve never heard of anybody else who has that as a first name, so I’m going to be Hyde.’”

Although it was taken from the 1886 Robert Louis Stevenson novella – that 100 years later became a hit Broadway musical and then a movie – Hyde admitted: “Young people don’t know that movie, that story.”

But the students at Harrison Central High School in Gulfport, Mississippi, sure knew who Hyde was.

“I was like an import and imports can be popular,” he laughed. “I was like the panda for the school. Everyone loved me. They finally got a China Boy.”

He admitted he had to deal with what he called “cliche” questions – “Do you speak Chinese? Do you know Kung fu?” – but said: “There were a few downsides, but I was alright. My life was fine.”

At Alabama he said he met his best friend, William:

“You know how military guys can be. He looked at me and said, ‘ You look like a child! No one is going to take you seriously unless you work out.’

“He had been in security and he taught me some things at first. And for two or three years I lifted and gained some strength.”

When he got to Dayton, he met another Chinese student who was into boxing.

Back then he said UD had a room with a lone heavy bag in it: “The guy taught me the six basic punches and I trained there and studied YouTube videos, too.”

This past summer he had an internship in Los Angeles and said he was riding his bike along Santa Monica Beach when he came across “two Russian dudes” working out:

“One guy was hitting the pads and I came up to the other one and said, ‘Are you a boxing coach?’ I asked him how much he charged for lessons and in a heavy Russian accent he said: ‘$50.’ That was cheap. Anyone else charges $140.

“I took him on as a coach and he was really picky about proper technique, things like that.

“Then when I came back to Dayton, I found this gym. I talked to Drake and started here.”

He’s now 140 pounds and has fought an exhibition on one of the First Friday shows Drake puts on in his gym.

Hyde trains after work, but has no illusions about his boxing career.

He said he does this strictly for exercise and fun and always keeps his safety in mind: “I’ve got to use my head. I’m an engineer. I’m not going to jeopardize that. I don’t have to go out in the ring and prove something.”

Hyde (QiYun) Li with his mother, XiaoPing, and his father, JianHua, at his graduation from the University of Alabama. CONTRIBUTED 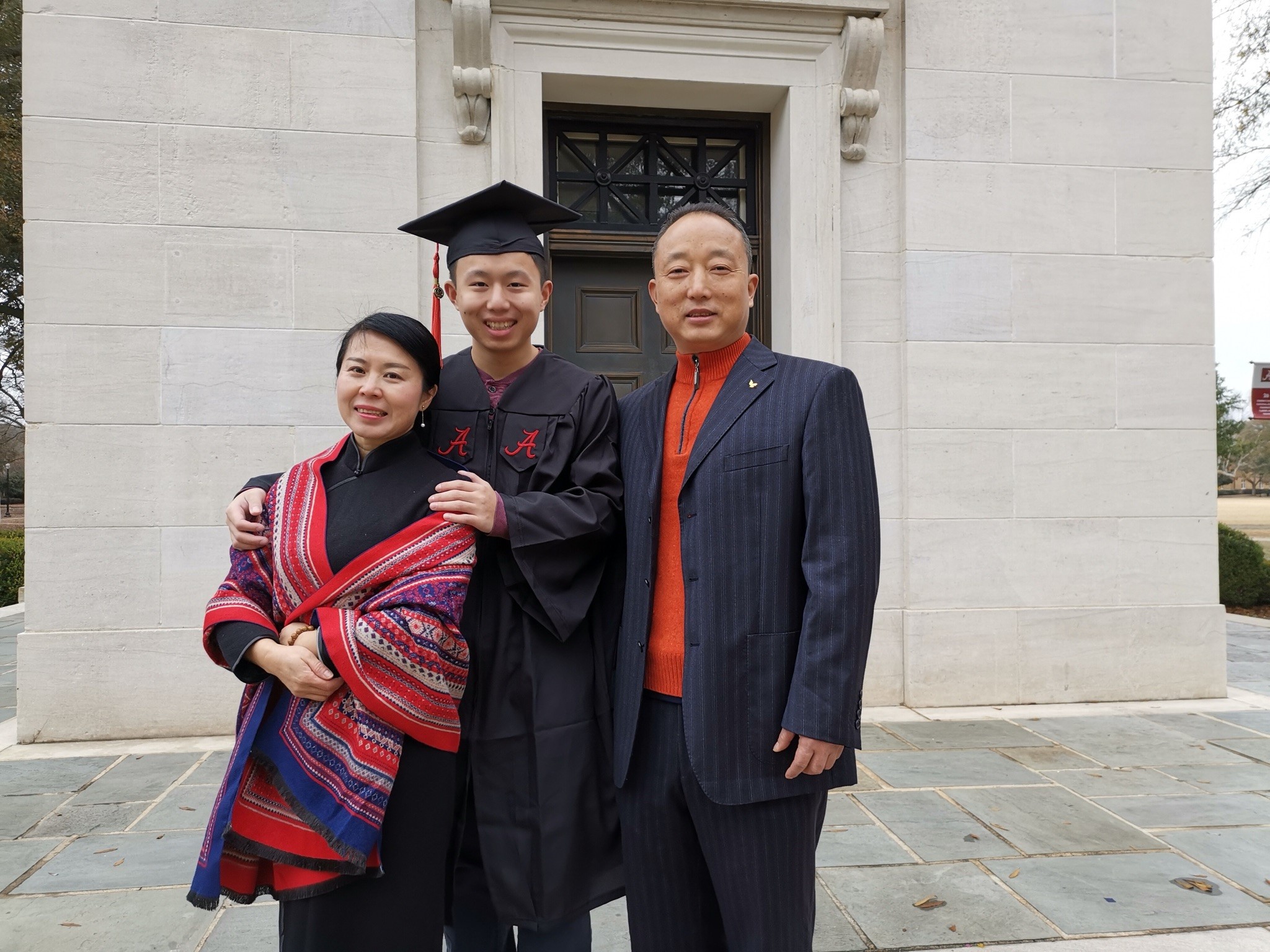 Hyde (QiYun) Li with his mother, XiaoPing, and his father, JianHua, at his graduation from the University of Alabama. CONTRIBUTED

A form of ‘expression’

Grace was adopted by an American couple, Ken Ashworth and Lele Levay, as was her younger sister Ting, who came from a different Chinese orphanage.

“I don’t have any information on my birth family and really don’t know anything about my past in China,” Grace said. “When I was growing up, my parents always wanted me to get in touch with my Asian roots, but I never felt ‘Asian enough’ and wasn’t comfortable in the Asian community because it’s not what I was used to.

“To be truthful, when I was younger, I didn’t enjoy the fact that I was Asian when my family was not.

“I struggled with my identity. I always felt my culture was a mod podge of my heritage versus how I was raised.

“But as I’ve grown up, I’ve changed and gotten a lot more confidence in myself and who I am.”

Although she said she got great love and support from her family, she said going away to college and being on her own – especial in communal setting of OU – helped in her growth and sense of self:

“My identity has changed. And both art and sports have helped me with that. They’ve given me a confidence, a way of expression, and that helps me come to a better realization of who I am and what I want to be.”

She said she made her “adoption story” the topic of her senior thesis show at OU.

The three months she’s spent at Drake’s Gym has helped her further transform. She said she’s gained more confidence in herself:

“I’m still nervous when I spar, but it’s kind of empowering, especially being one of the only women in here.”

In her Oct. 8 exhibition, she’ll face Heidi Schindler, a 38-year-old nurse practitioner from Waynesville. The two train together now and the other day they had a spirited sparring session that was encouraged by their fellow boxers.

“He makes fun of me because apparently I’m not ‘Chinese Chinese,’” she said with a laugh.

With a grin, she rolled down the white sock on her ankle to reveal a small tattoo that read:

Grace Ashworth with her younger sister Ting. When each was very young, they were adopted from different orphanages in China by their American parents, Ken Ashworth and Lele Levay. CONTRIBUTED 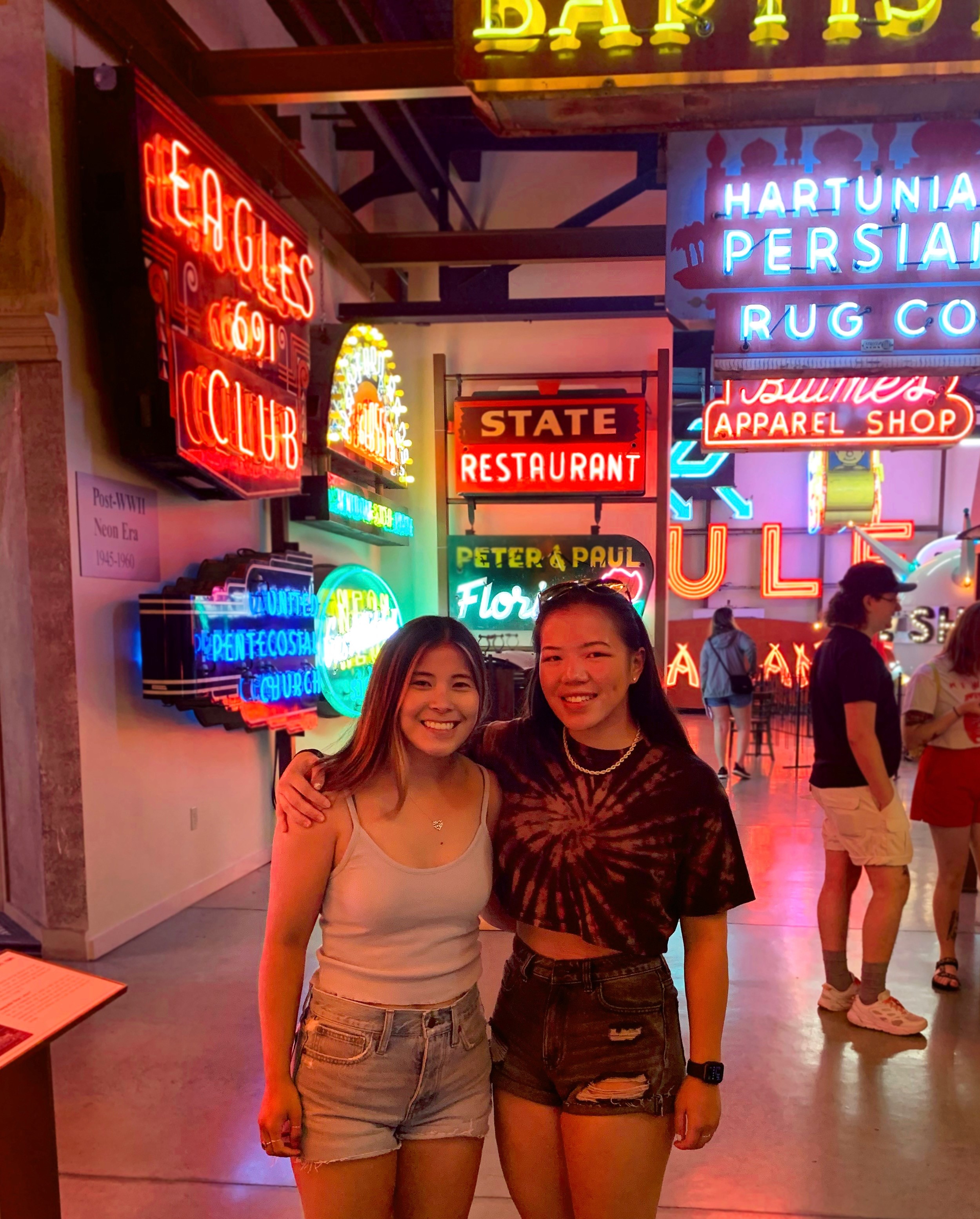 Grace Ashworth with her younger sister Ting. When each was very young, they were adopted from different orphanages in China by their American parents, Ken Ashworth and Lele Levay. CONTRIBUTED

Tommy Nguyen said he didn’t learn to speak English until he was about five.

When his parents, Tommy Sr. and Lily, came from Vietnam and ended up in Oklahoma, they worked hard to start a new life. They spoke Vietnamese at home and he said it was his “godfather” – a sergeant major in the Army – who taught him to speak and read English and introduced him to sports along with his own son.

When the family moved to Beavercreek, Tommy Jr. was involved in the traditional school sports, but also developed a fascination in boxing after watching Filipino legend Manny Pacquiao, the only boxer to win 12 major boxing titles at eight different weight divisions and who also held world titles in four different decades.

Tommy went online, found Drake’s Gym and began training over three years ago. He was scheduled to fight an exhibition at Drake’s 2020 charity show, but the event was canceled because of the COVID-19 pandemic.

Since then he has honed his skills and these days he even coaches a class at the gym once a week.

He visited Vietnam once with his family when he was 19 and liked it very much. But he said some relatives there, like his parents here, weren’t especially fond of the few tattoos he has.

At one of his inkings, he did try to appease his mom and got a lily tattooed on his calf.

While she might begrudgingly accept that, he said she’s still hesitant about his boxing:

“She’s never seen me in the ring. She can’t watch. If I do get her to the (Oct. 8) show, she might cover her eyes the whole time.”

Hyde said his parents know he goes to a boxing gym, but they don’t know he’s into the sport this deep.

Grace, though, said her family is flying in to see her October debut:

Tommy Nguyen with his parents, Lily and Tommy Sr., at his Beavercreek High graduation. CONTRIBUTED 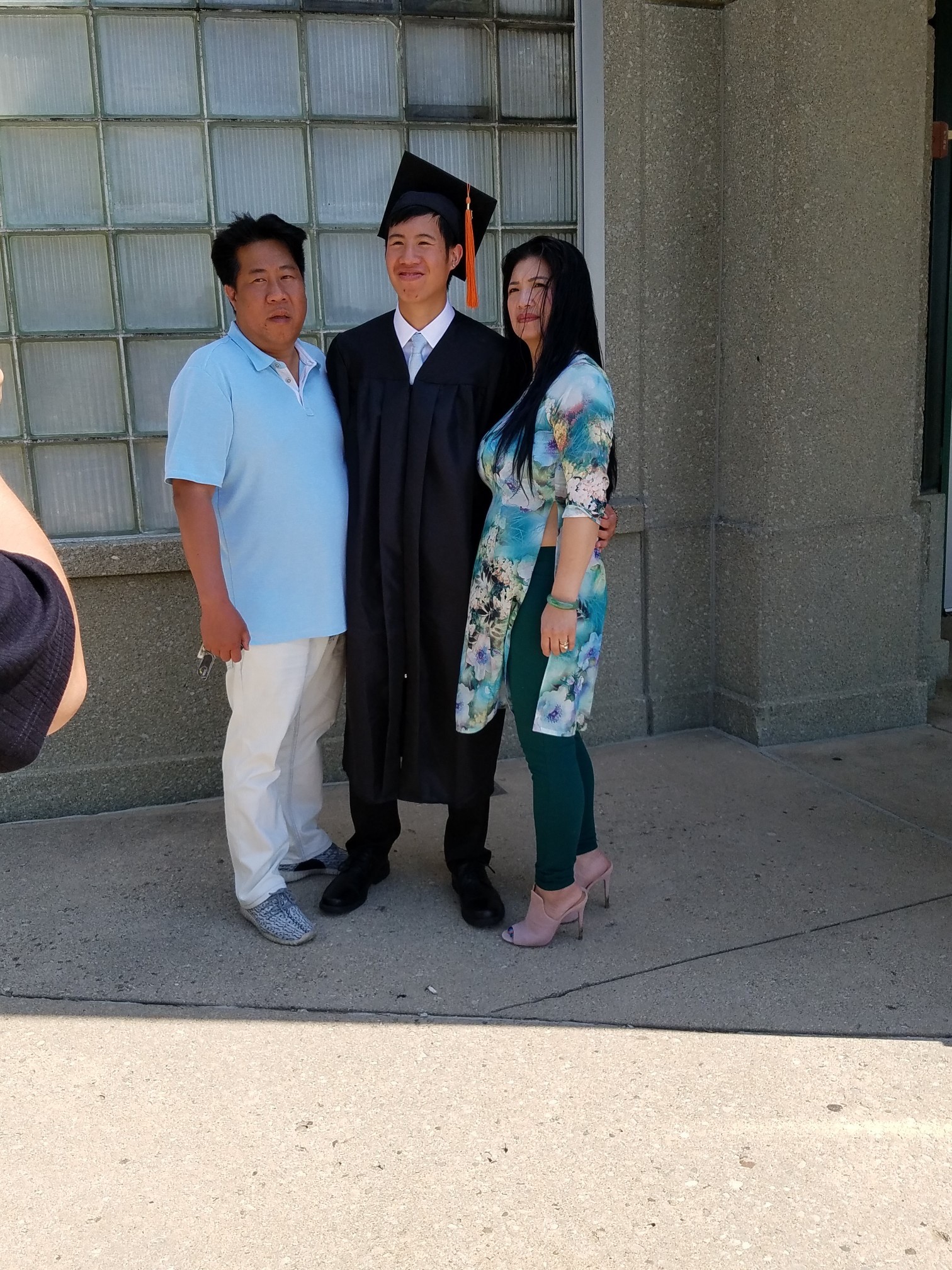 Tommy Nguyen with his parents, Lily and Tommy Sr., at his Beavercreek High graduation. CONTRIBUTED

What the family will discover is that Grace is one of the most beloved boxers in the gym:

“I just love seeing her walk in and everybody else does, too,” Drake said. “She’s just a delight to be around. She always has a smile on her face and she just lights up the room. And that brings a positive energy to the whole group.”

As for negatives, Hyde can think of only one.

“I’m from the University of Alabama,” he laughed. “Rollll Tide!”

He knows how that goes over in Ohio State country:

“Everybody here probably hates me!”

The “Asian Invasion” is just fine.

A Tide Intrusion, not so much.